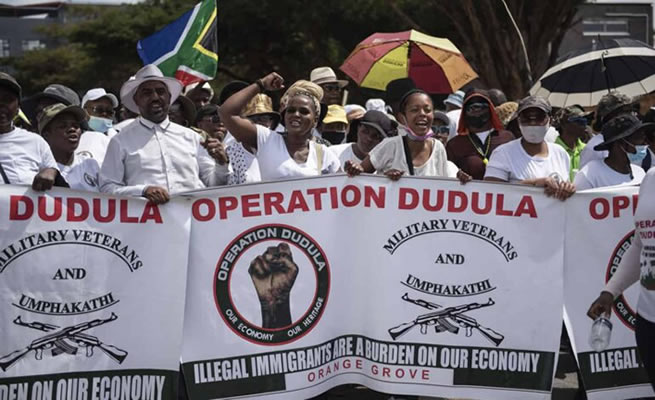 Limpopo members of anti-immigration movement Operation Dudula, a splinter group from the Put South Africans First movement, that first popularised and renewed anti-immigrant campaigns on social media, gathered in Polokwane on Friday to elect a temporary provincial structure for the operation set to launch at the end of April.

They also discussed the importance of the campaign and existing issues in the province.

Shortly before the meeting, BONUS spoke to Vincent Kunutu, the chairperson of Seshego Against Crime and Gangsterism forum about Operation Dudula in Limpopo.

He said by gathering, their aim is to force the government to tighten immigration by-laws.

“We are experiencing the same problem as in other provinces, with the influx of illegal migrants without proper documentation. We need to force government, especially Home Affairs to implement and regulate their policies”.

He added that it was important that they select a leadership structure that will understand the constitution of the national office to avoid people causing harm to others in the name of Dudula.

Among the candidates elected to be part of the provincial executive directors of Dudula are Grace Ngwetjane, Mantjie Mamabolo, Godfrey Munyai and Aka Kolobe.

Operation Dudula formally launched in Durban over the weekend, and more provincial formations are expected in weeks to come.

Nomasonto Nkwanyana, a member of Operation Dudula, said they were still preparing to launch in different provinces. “After our launches in the nine provinces, we will start to dudula [push forcefully]. You saw they were provoking us but we remained disciplined. We don’t provoke nor attack anyone, we don’t do anything wrong — but after we are done with our launches, they will see,” she said.

Victoria Mamogobo, from Put South Africa First, said foreign nationals who do not occupy jobs that fall under the “critical skills list” as set out by the department of home affairs should be deported.

“The Immigration Act of 2002 says you must come to SA to offer critical skills and the critical skills list was issued by the department of home affairs. Nowhere does it mention working as a truck driver or a teacher,” she said.

The Department of Home Affairs recently published its latest critical skills list for South Africa, outlining those skills in short supply in the country. This means that if a foreigner or a South African national wants to easily find a job in South Africa, then they have to pursue at least one of these 16 professions.