Nhlanhla Lux and his Operation Dudula thoroughly investigated: Here are all the findings

He has posted pictures of himself as an aviator, discussed golf on social media, and has been involved in youth empowerment issues.

He has strong views about gangsterism in prisons and the development of township economies.  Now he has emerged as the leader of a campaign against foreign nationals living in South Africa.

These are the many faces of Nhlanhla Lux Dlamini, known as Nhlanhla Lux, the leader of #OperationDudula.

Since its first online appearance in June 2021, #OperationDudula has become one of the most popular hashtags calling for the removal of illegal foreign nationals in South Africa, alongside #PutSouthAfricaFirst.

#OperationDudula has expanded beyond an online conversation and now operates as a vigilante group that targets foreign nationals and their businesses. 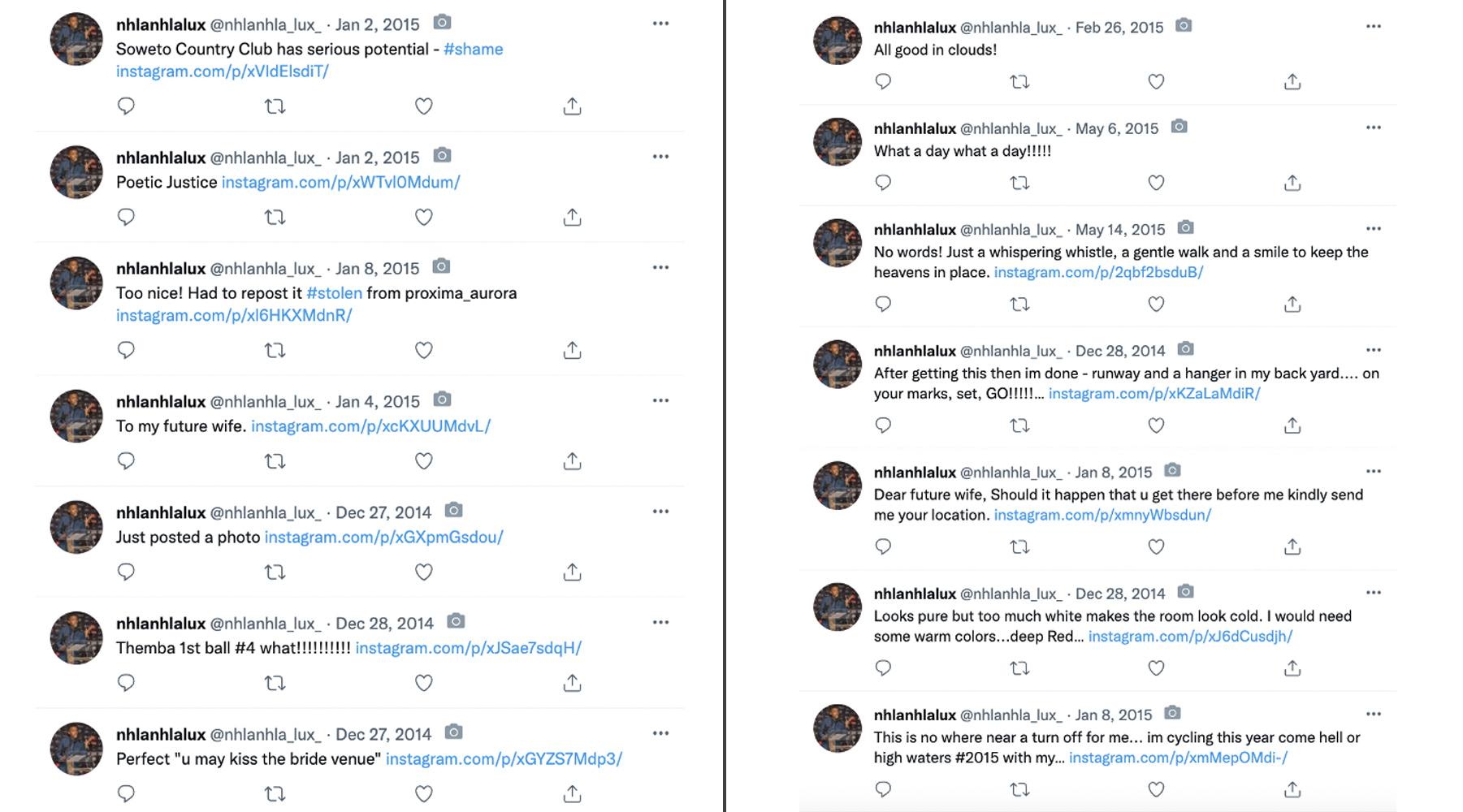 As fears of an escalation of social tensions and violence grow in many communities, the Centre for Analytics and Behavioural Change (CABC) looked at some of the factors that drive the online conversation around #OperationDudula.

The first of these factors is the account of the group’s leader: @nhlanhla_lux_ .

A timeline analysis reveals that since its creation in June 2014, the account shared a number of low traction posts, predominantly with Instagram links that were either broken or unfollowed.

This trend continued until 2018, when the posts began to gain some traction. Many of these posts were about golf and aviation, specifically Native Airways, which Lux claimed to own. 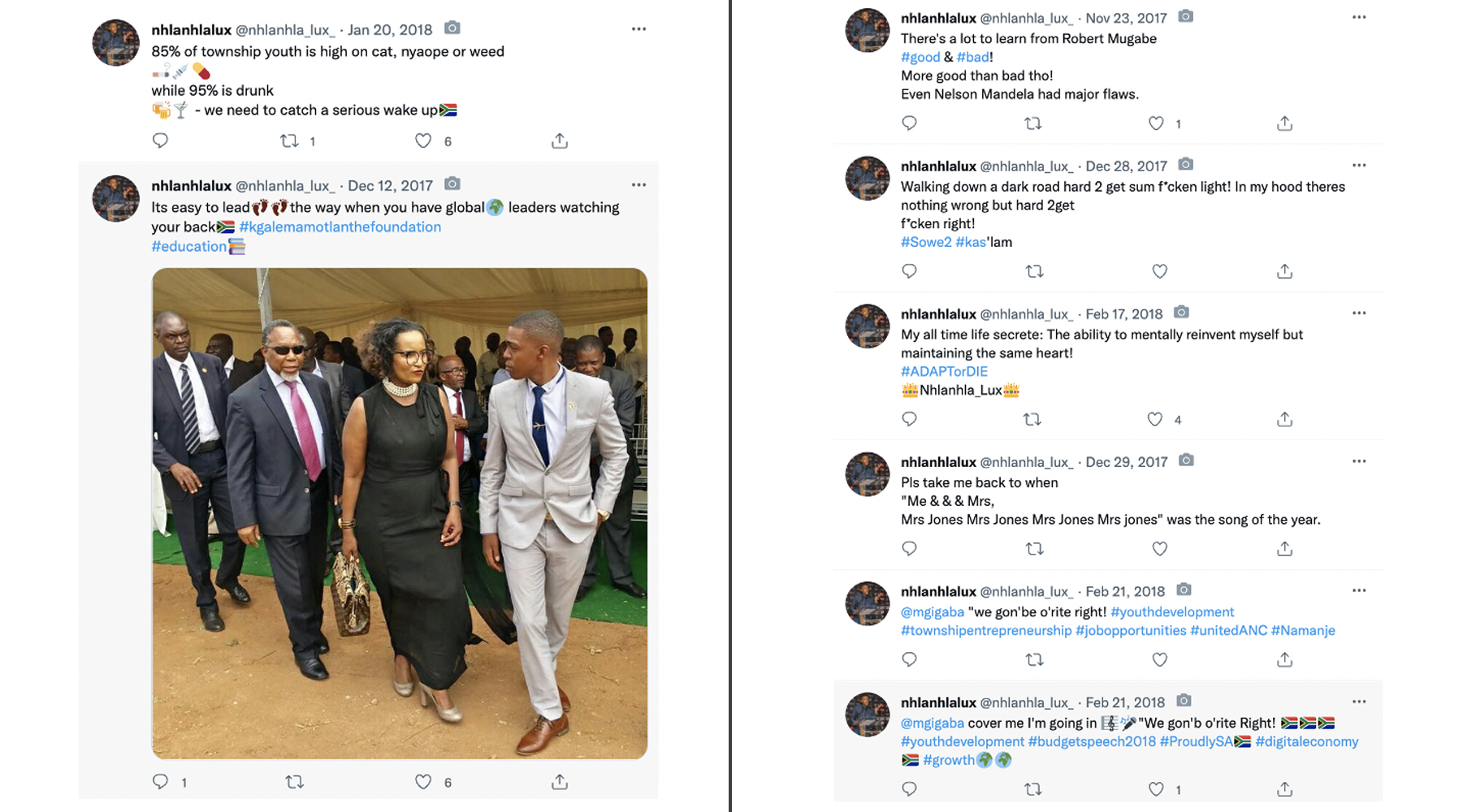 At this time, the account also engaged in conversation around social issues such as gangsterism in prisons and the development of township economies. 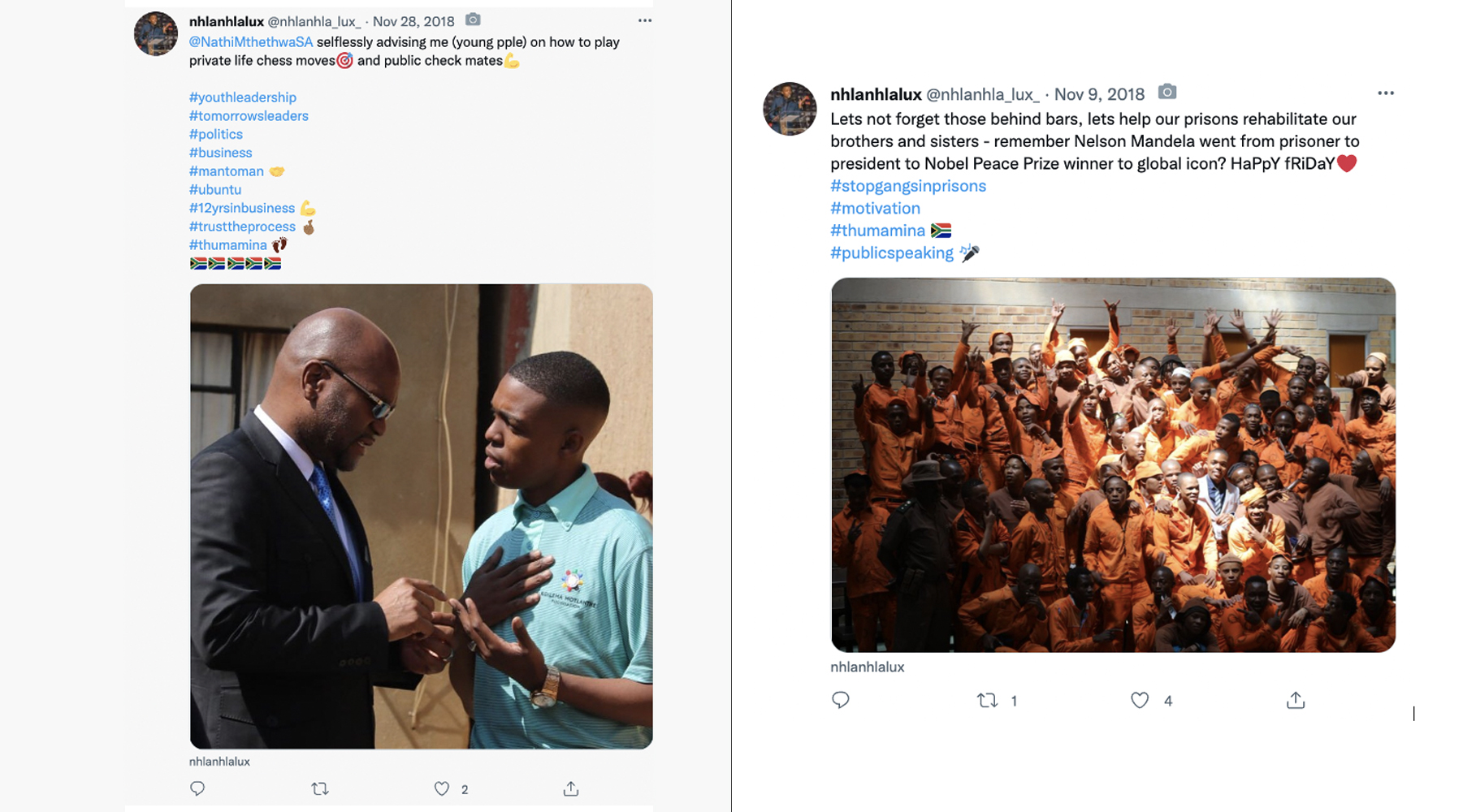 In July 2021 Lux was involved in protecting Maponya Mall from looters during the unrest. 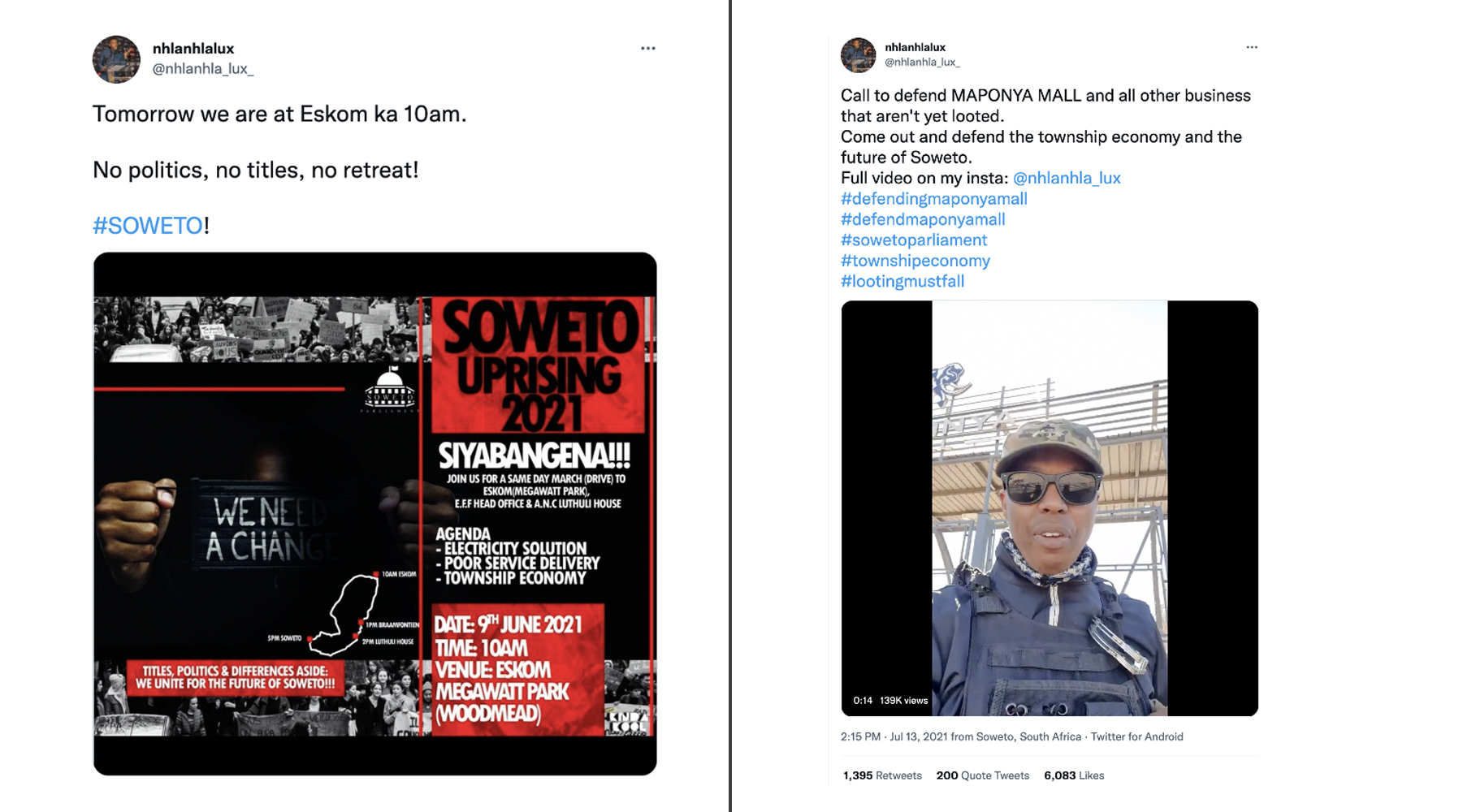 The theme of “patriotic citizenship” was then introduced in the account’s posts. 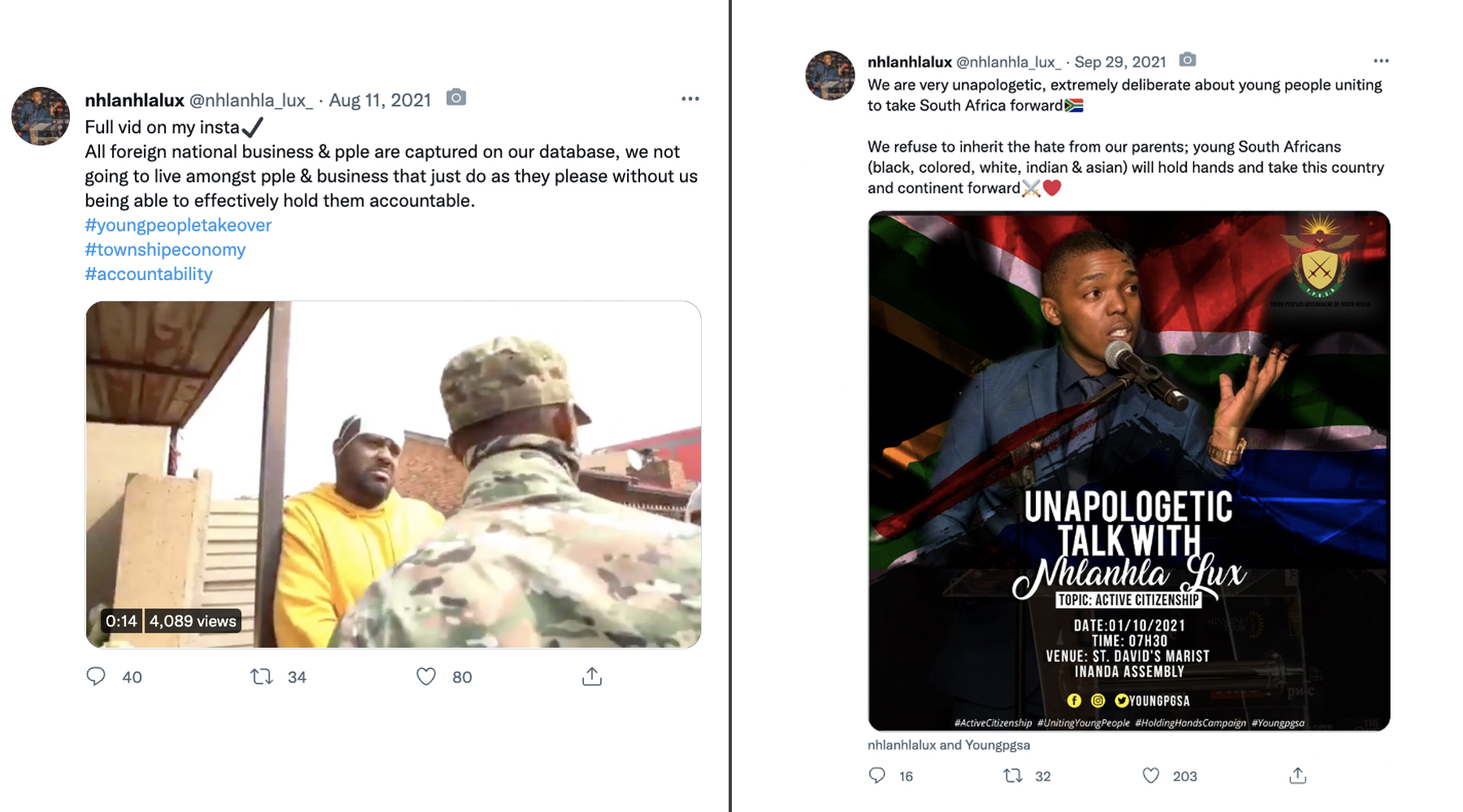 In October, the account engaged in conversation related to the local government elections. 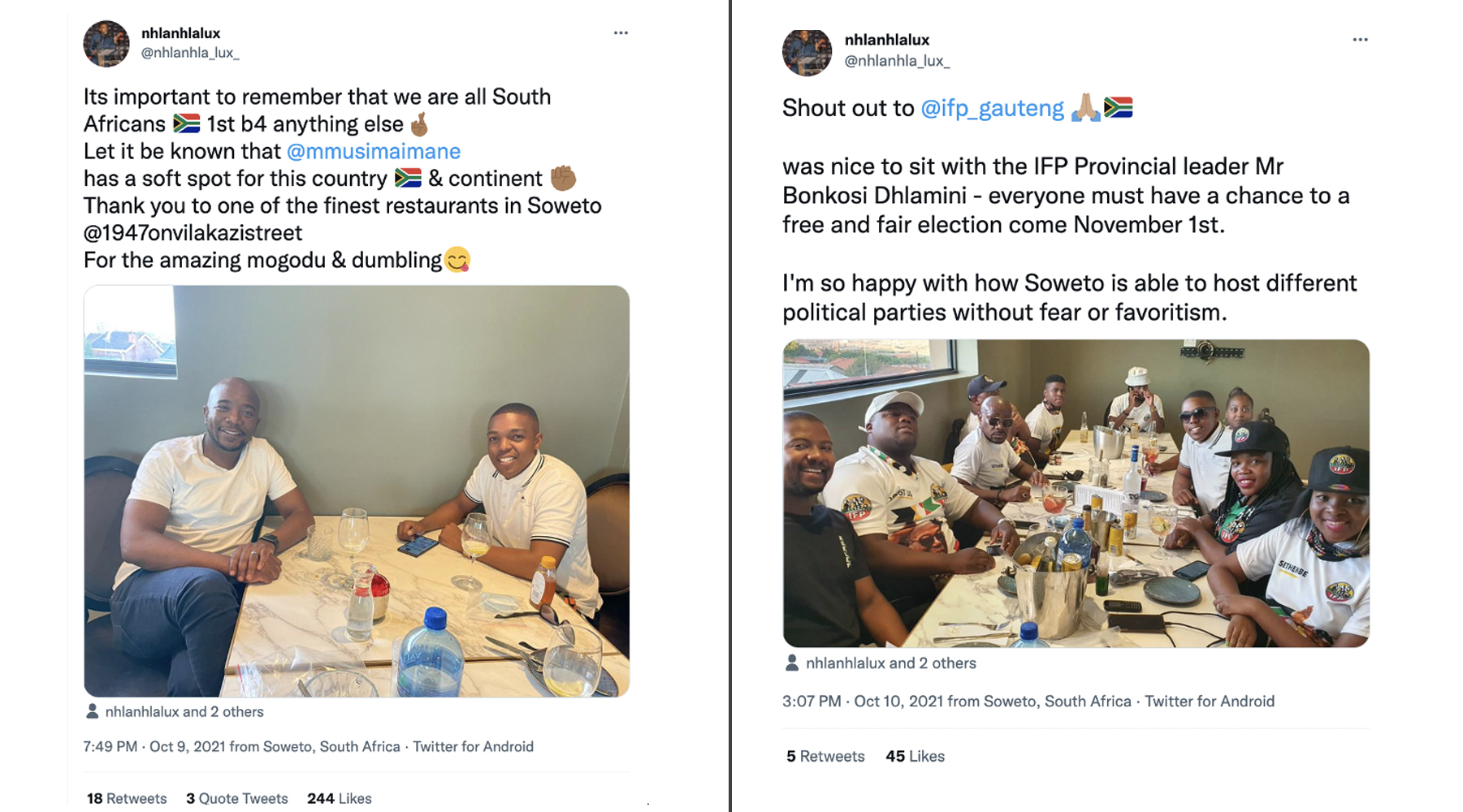 By November,  the account ramped up its stance on “patriotism” by engaging in the #PutSouthAfricaFirst conversation, which calls for the prioritisation of South Africans over foreign nationals in the economic sector.  This theme soon became prominent in posts. 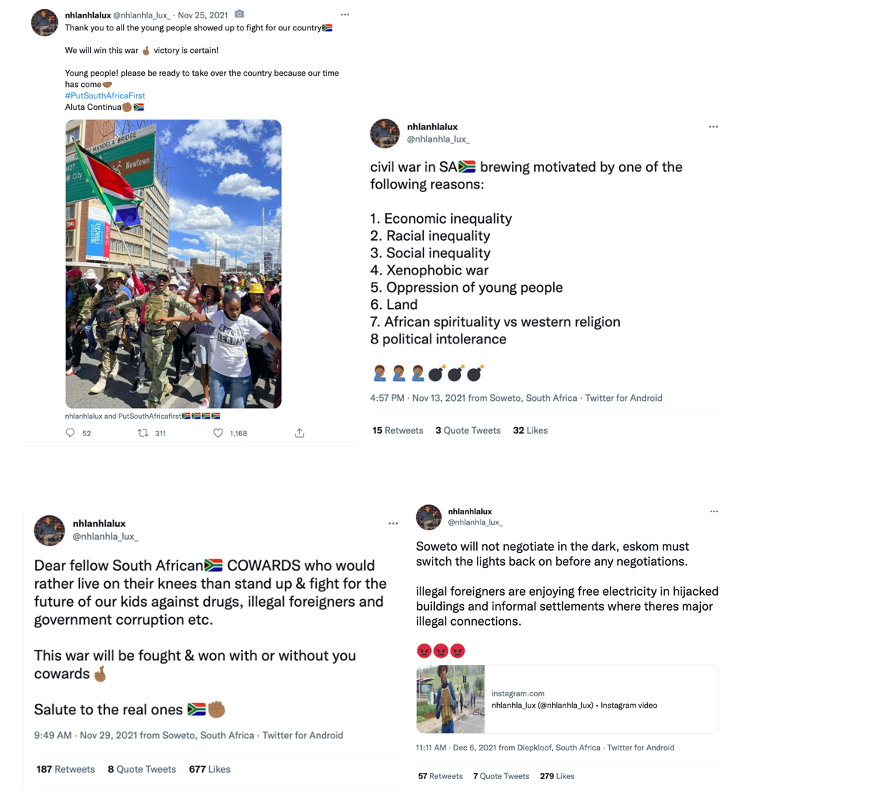 Lux has continued to dominate headlines and trend lists this year due to his leadership of #OperationDudula, which has been responsible for attacks on foreign nationals in various parts of the country. 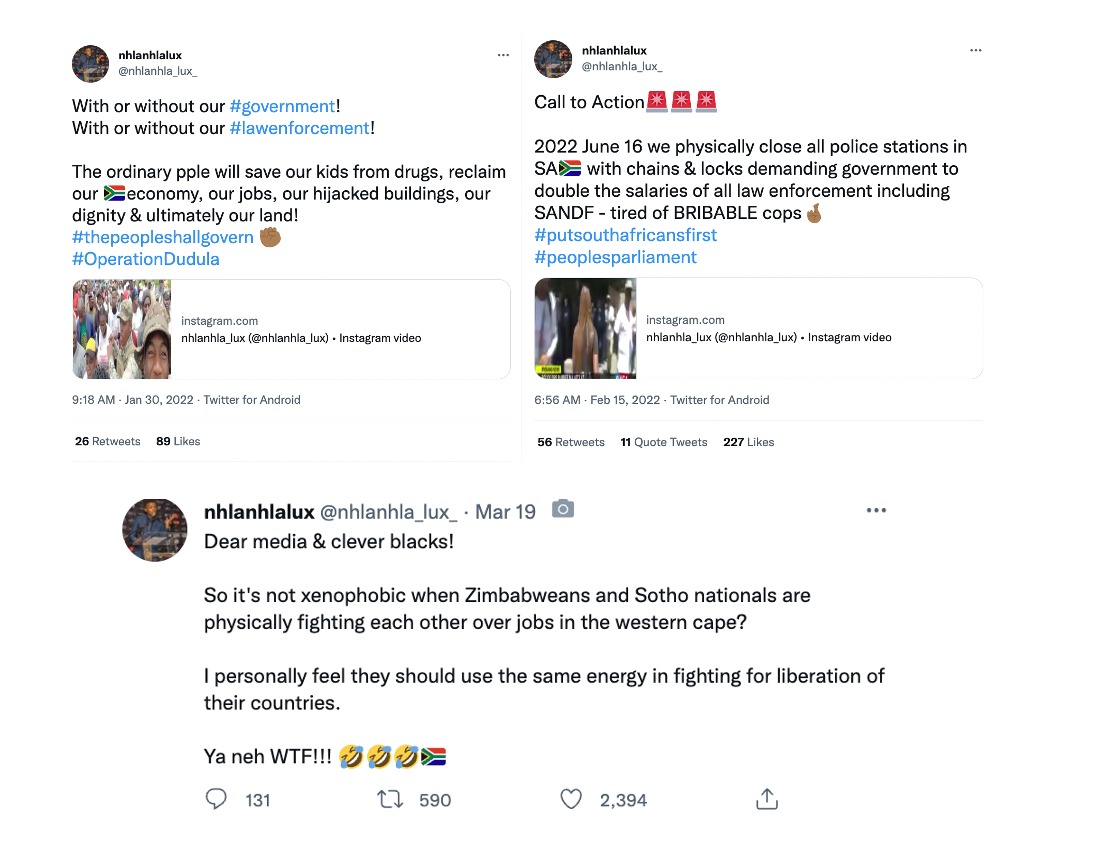 The graph below indicates the account first used the #OperationDudula around 30 January this year.

Mentions of #OperationDudula by the Nhlanhla Lux account over time

This was despite reports of Lux’s association with #OperationDudula being reported as early as June 2021. 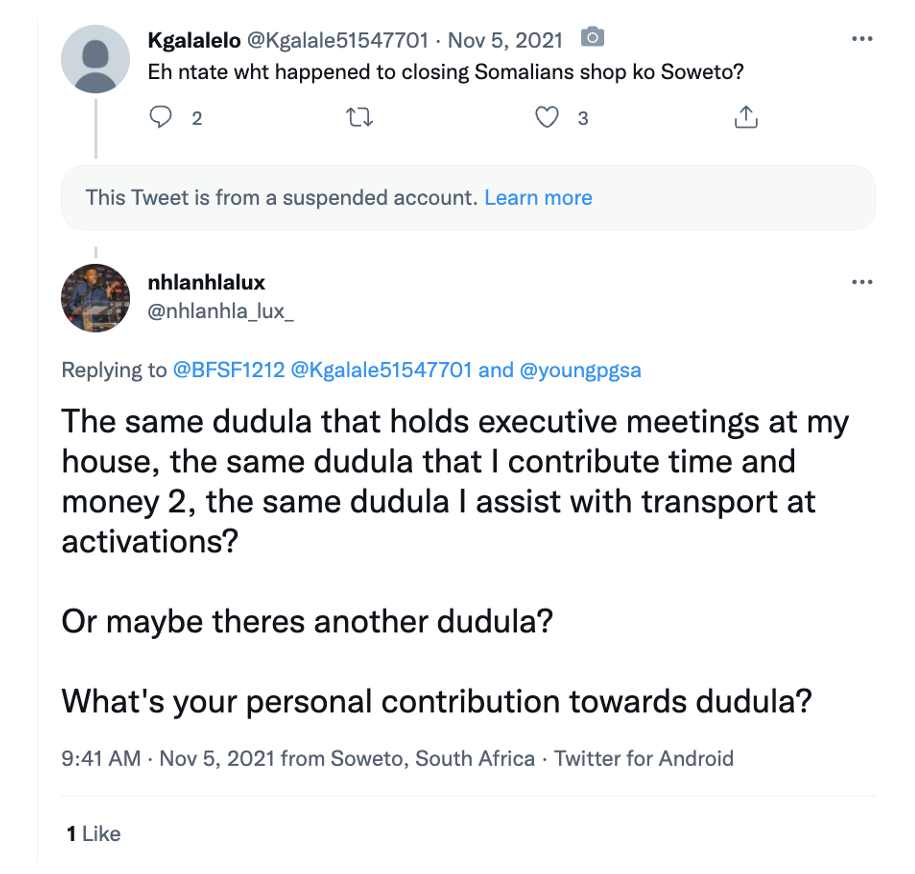 If Lux began mentioning #OperationDudula in January 2022, about six months after its emergence, who was driving the conversation between June 2021, when the hashtag first emerged, and December 2021?

The online conversation around #OperationDudula has received more than 450,000 mentions since the hashtag emerged in June 2021 until 7 April 2022.

The CABC also found that while Lux leads the physical mobilisation of #OperationDudula and receives high traction on posts around the operation, he is not included in the top 10 authors within the conversation.

With more than 30,000 tweets since its creation in February this year, the @Lolobee93658919 account has been posting content predominantly linked to #PutSouthafricaFirst and #OperationDudula. 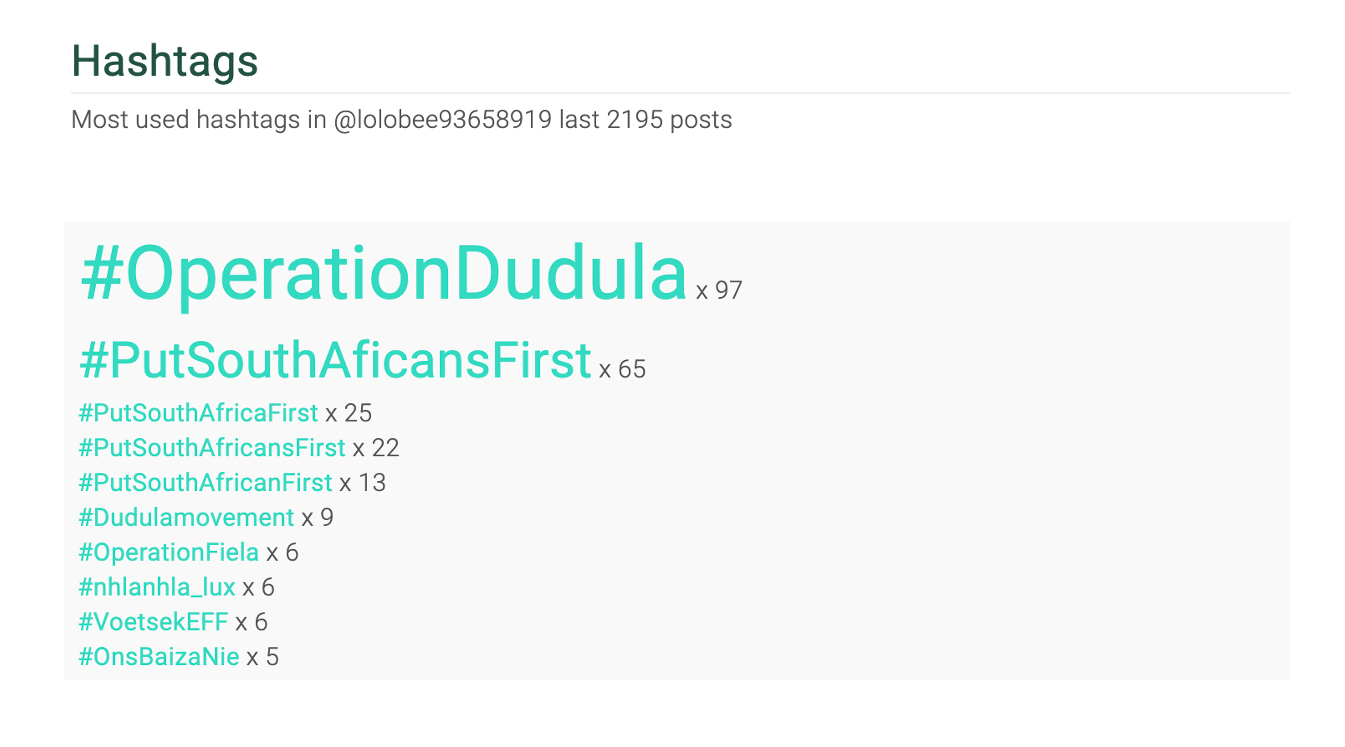 This account has also been flagged for its high tweet frequency, which averages 491 a day since the account’s creation and 549 a day for the last 2,195 tweets. 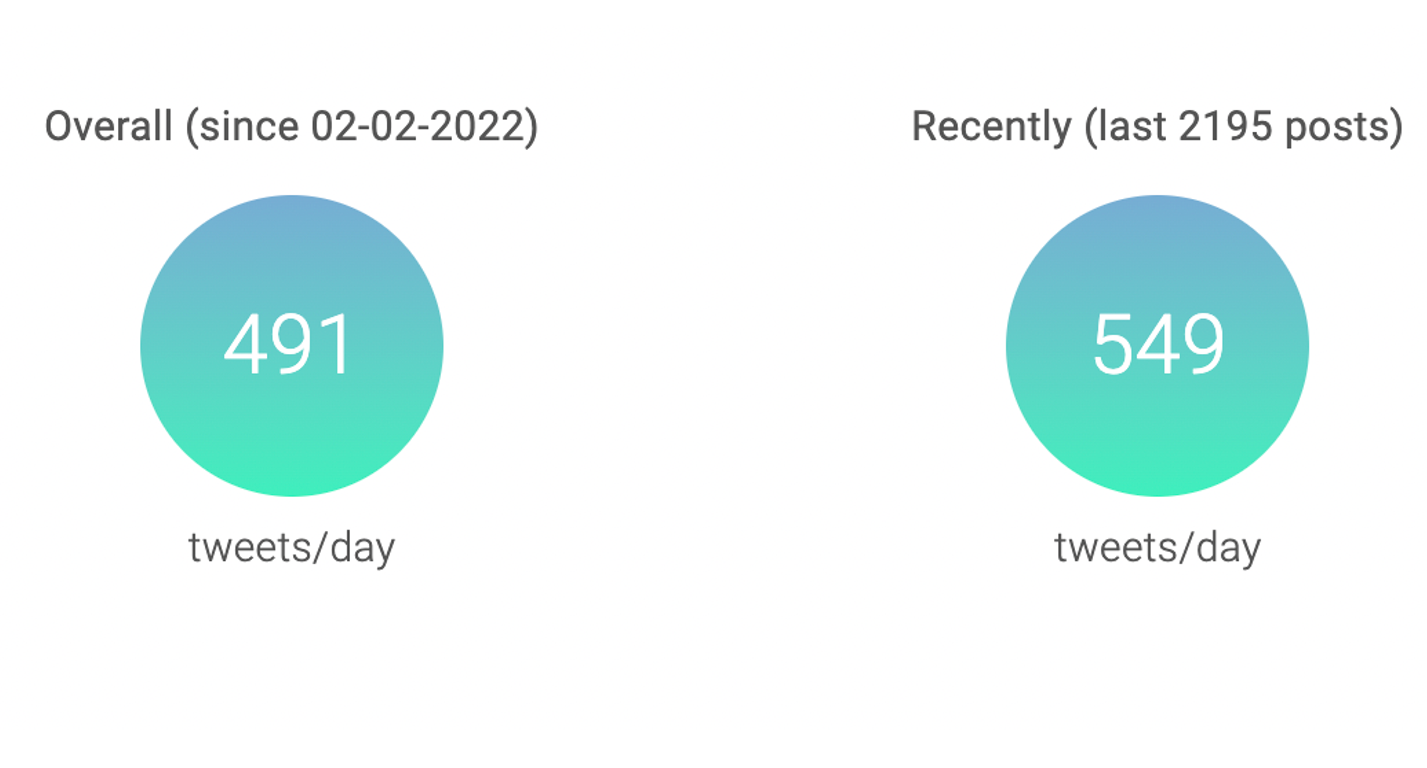 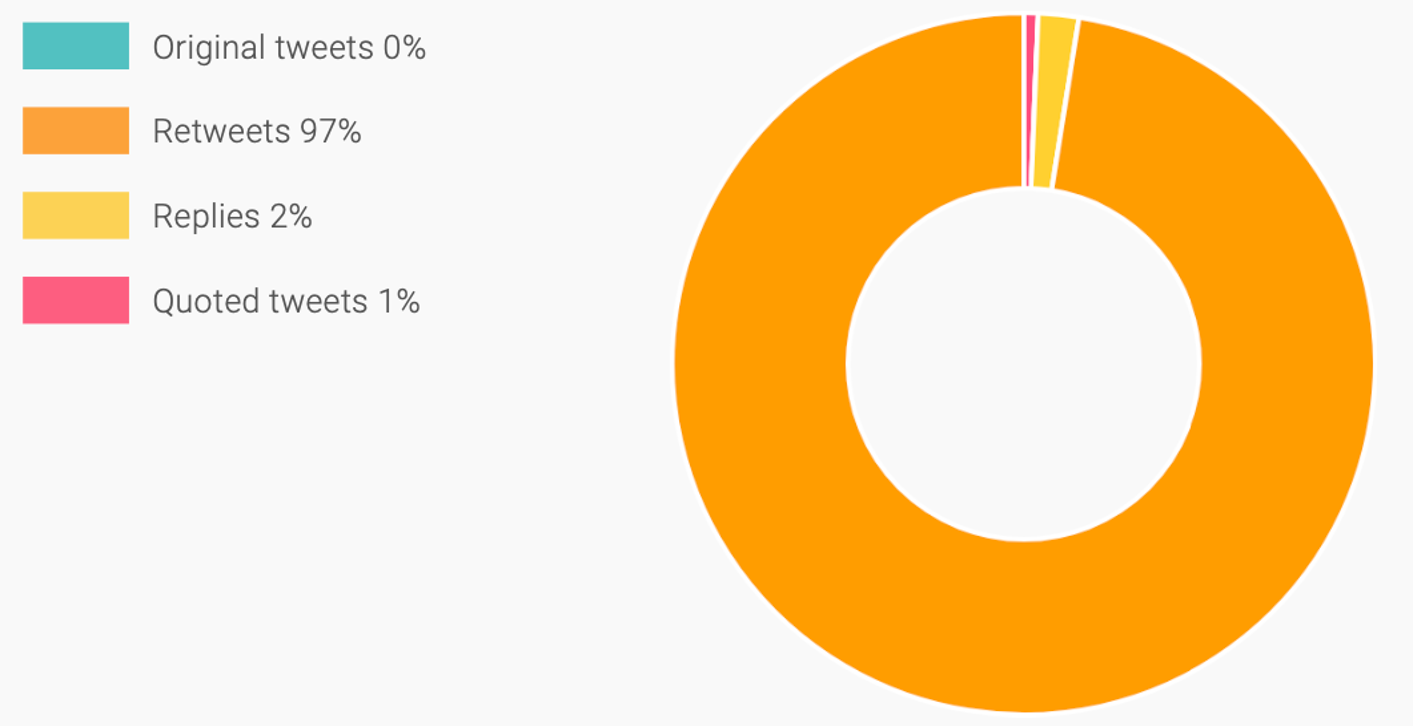 The CABC detected a number of instances where @masotobe39 engaged with the @Lolobee93658919 account, which has the highest number of mentions within the #OperationDudula conversation. 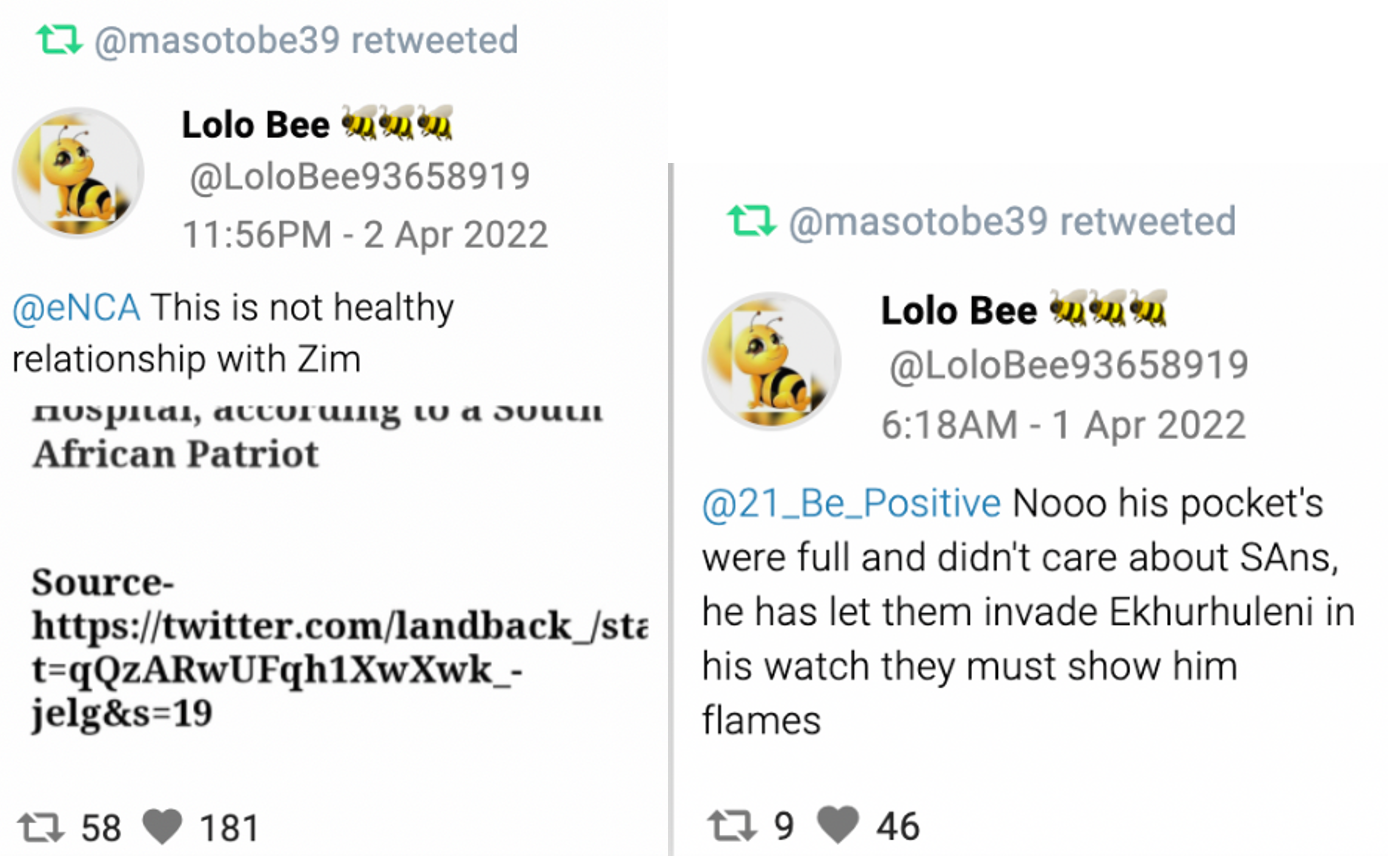 The @kraalbulawayo account was found to have the third-highest number of mentions of #OperationDudula.

Lux, whose online traction has improved over the years, is not among the highest authors in the conversation. The CABC found that the account’s content is not among the top 10 in terms of reach.

However, Lux’s presence in physical mobilisations, his arrest for alleged housebreaking and his subsequent release have kept his name at the top of the trending lists: mentions of the @nhlanhla_lux_ had more than 130,000 mentions this year.

Online authors like @Lolobee93658919 — which in a space of two months has already sent out more than 30,000 tweets and retweets — keep the conversation going.

The activities of #OperationDudula and its leader have left many questions unanswered.

At the top of the list is this: will the man of many faces, Lux, and the militant operation he leads be curtailed by law enforcement agencies, or will they create further social discord, violence, and deaths? – Daily Maverick

We use cookies on our website to give you the most relevant experience by remembering your preferences and repeat visits. By clicking “Accept All”, you consent to the use of ALL the cookies. However, you may visit "Cookie Settings" to provide a controlled consent.
Cookie SettingsAccept All
Manage consent

This website uses cookies to improve your experience while you navigate through the website. Out of these, the cookies that are categorized as necessary are stored on your browser as they are essential for the working of basic functionalities of the website. We also use third-party cookies that help us analyze and understand how you use this website. These cookies will be stored in your browser only with your consent. You also have the option to opt-out of these cookies. But opting out of some of these cookies may affect your browsing experience.
Necessary Always Enabled
Necessary cookies are absolutely essential for the website to function properly. These cookies ensure basic functionalities and security features of the website, anonymously.
Functional
Functional cookies help to perform certain functionalities like sharing the content of the website on social media platforms, collect feedbacks, and other third-party features.
Performance
Performance cookies are used to understand and analyze the key performance indexes of the website which helps in delivering a better user experience for the visitors.
Analytics
Analytical cookies are used to understand how visitors interact with the website. These cookies help provide information on metrics the number of visitors, bounce rate, traffic source, etc.
Advertisement
Advertisement cookies are used to provide visitors with relevant ads and marketing campaigns. These cookies track visitors across websites and collect information to provide customized ads.
Others
Other uncategorized cookies are those that are being analyzed and have not been classified into a category as yet.
SAVE & ACCEPT
Posting....
'Candidate' should login to apply for this job. Click here to logout And try again