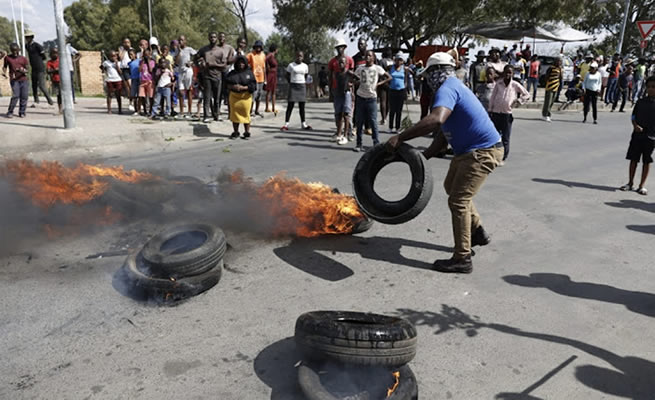 The United Nations in South Africa expressed “grave concerns” about violent attacks on foreign nationals after a Zimbabwean man, Elvis Nyathi, was assaulted and set alight in Diepsloot last week on Wednesday night.

Acting resident coordinator and head of the United Nations (UN) in South Africa, Ayodele Odusola, said he noted with “great concern” the ongoing incidents of violence, intimidation and harassment against foreign nationals.

“It is deeply worrisome and unfortunate that this is happening in a country with one of the most inclusive constitutions globally,” Odusola said.

“Over the recent past, we have noted with deep concern as movements such as Operation Dudula are illegally forcing people [ who are] suspected to be undocumented foreign nationals, to show their papers.”

“Our thoughts are with the family of Mr Nyathi and with all of those families affected by similar violence in the recent months,” Odusola added.

The death of Elvis Nyathi a black man burnt alive by black people in Diepsloot South Africa should serve as a reminder that just going around profiling other blacks leads to vigilantism. A black man shouldn’t die for what’s happening in South Africa! RIP to his family

Nyathi was reportedly watching TV at home shortly after returning from work when a mob ran through his neighbourhood, chasing a group of people, knocking on doors and demanding to see IDs. The mob allegedly caught Nyathi, tied him up, assaulted him and set him alight.

His body was later found in Thubelihle Street, mere metres from his home.

According to Odusola, the South African government has ratified several international human rights and refugee instruments that are an integral part of national law.

“This requires that the human rights of all persons residing in South Africa, regardless of their nationality or immigration status, must be respected.”

Odusola added: “This includes individuals who may be refugees, asylum seekers or stateless persons.”

When News24 visited Diepsloot on Wednesday, community member Phindile Shabangu said police in the area failed to prioritise criminality in the area, which she blamed on foreign nationals.

She also said all that the Diepsloot community could do was sit back with arms folded and watch criminals take over.

Shabangu said it was not a case of xenophobia, but that they just want the government to address their concerns.

Allegations are that there were 11 killings between October and December 2021 in Diepsloot but that only four arrests were made.

Odusola expressed strong concerns about all forms of violence.

“The UN stands by the recent statements by government representatives, opposing actions by the violent protesters and urging people not to take the law into their hands.”

“One example of this includes President Cyril Ramaphosa stating that as a country founded on tolerance, respect for diversity and non-discrimination, we must never allow ourselves to turn against people who come from beyond our borders, and that acts of lawlessness directed at foreign nationals, whether documented or undocumented, could not be tolerated.”