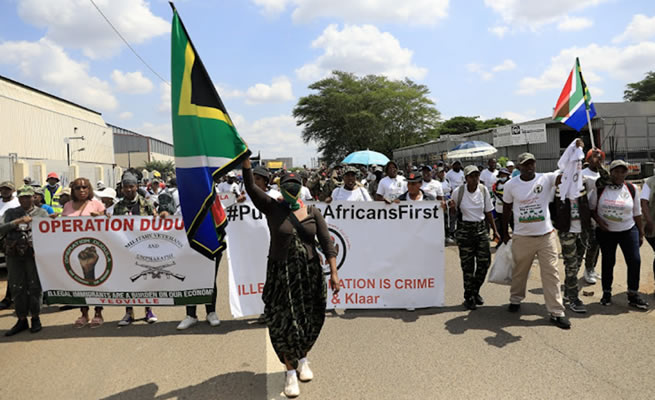 Operation Dudula commended its supporters for not responding with violence when they were “provoked” during their march in Durban on Sunday.

Members of Operation Dudula was marching from the Durban City Hall to the Point police station as part of the official launch of its KwaZulu-Natal branch.

A largely peaceful march threatened to turn ugly when three objects were thrown from Sea Point Towers — a building that accommodates UKZN and Mangosuthu University of Technology students as well as tenants — at the marchers. However, the marshalls, Operation Dudula leaders and police blocked the entrance as people ran towards it.

Operation Dudula chairperson Zandile Dabula said President Cyril Ramaphosa must take note of how peaceful they remained amid the “attack”.

“I hope the president saw what happened there [on Shepstone St], where we were marching peacefully but [people] tried to attack us. We still continued to march peacefully because we are not vigilantes. We are not criminals,” she said.

The movement’s Peter Dimba echoed similar sentiments as he urged supporters to continue with the “discipline” they showed going forward.

“We don’t want to be called a vigilante group because every time we demonstrate to raise our concerns there are names like ‘vigilante’ that pop up. They say we beat people but we did not beat anyone,” he said.

Nomasonto Nkwanyana, a member of Operation Dudula, said they were still preparing to launch in different provinces. “After our launches in the nine provinces, we will start to dudula [push forcefully]. You saw they were provoking us but we remained disciplined. We don’t provoke nor attack anyone, we don’t do anything wrong — but after we are done with our launches, they will see,” she said.

Dudula deputy chairperson Dan Radebe said they were going to hold home affairs officials accountable for their inaction. “They must remove illegal immigrants, it’s their job. We are not going to do it for them. We are pushing them to enforce the law,” he said.

Victoria Mamogobo, from Put South Africa First, said foreign nationals who do not occupy jobs that fall under the “critical skills list” as set out by the department of home affairs should be deported.

“The Immigration Act of 2002 says you must come to SA to offer critical skills and the critical skills list was issued by the department of home affairs. Nowhere does it mention working as a truck driver or a teacher,” she said.

The Department of Home Affairs recently published its latest critical skills list for South Africa, outlining those skills in short supply in the country. This means that if a foreigner or a South African national wants to easily find a job in South Africa, then they have to pursue at least one of these 16 professions.

Victoria Mamogobo also called for African leaders to take care of their citizens as she called for the protection of borders.

“We want our jobs and borders protected. That is not something we will negotiate … There is no country in Africa that will give South Africans opportunities, but we are expected to carry the whole of Africa. What are African leaders doing? Why should we give their people opportunities?”

“We are taking all the concerns and all the matters seriously. That’s the reason why we are having continuous operations and inspections at the moment, to show that we’re taking this matter seriously,” he said.