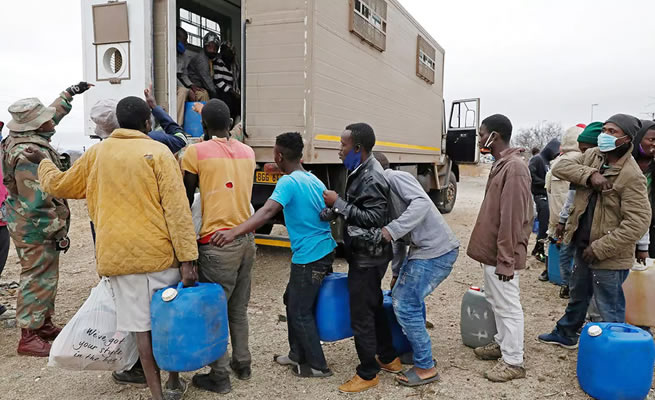 The initial announcements were made late last year. Motsoaledi referred to the border guards this weekend, following the gruesome murder of Zimbabwean national Evlis Nyathi in Diepsloot last week.

In an interview with eNCA yesterday, Motsoaledi hinted that tensions at border posts like Beitbridge were rising. He said SA National Defence Force (SANDF) soldiers patrolling the border had to watch helplessly as soldiers from the Zimbabwe National Army openly helped border jumpers to get into SA.

He said he had visited the border post in January and was told by senior SANDF officers they were concerned the two armies could “start shooting at each other” out of frustration because the Zimbabwean military was helping illegal immigrants cross over to live and work in South Africa illegally for money.

He said the problems of illegal immigrants were much worse across the 320 kilometre border with Zimbabwe than with another neighbour, Namibia, which shared a 900km of border.

The government said it would recruit, interview and appoint 200 people as border guards, buy 15 vehicles, and get logos, emblems and uniforms designed. However, Motsoaledi said the unit was not yet ready to be launched.

According to political analyst Dr Levy Ndou, while the government had a legal obligation to ensure the country’s borders were secured, it had failed in its responsibility.

“The SA government has failed, firstly, to ensure that borders are secured, and now they are coming with the border management setup, it should be welcomed by those who want to see government performing its own responsibility,” he said.

“But the biggest challenge and question would be, will it actually ensure that, indeed, borders are safe, because government is not very clear in terms of its position about illegal immigrants”, which was why some citizens were taking the law into their own hands.

Motsoaledi denied the government had done nothing about border security, citing the establishment of the BMA as proof of action taken. “The truth is that there are no results yet because it’s a new structure,” he said during a community briefing in Diepsloot last Friday.

“I also conceded to the fact that this issue of borders was described and picked up by the National Intelligence Coordinating Committee (Nicoc) 10 years ago, when they were doing defence estimates.” He said Nicoc had realised there was a problem at the borders and recommended government formed a structure, a border management authority – which unfortunately took 10 years for parliament to pass and another five months to implement.

Meanwhile Zimbabwe’s ruling party, Zanu-PF, condemned the murder of Nyathi and urged the SA government to seek lasting solutions to the recent uproar between South Africans and illegal immigrants.

“Zanu-PF continues to engage the South African authorities through diplomatic and other channels [to implement] due safe- guards and protection,” it said. “It’s accorded to all who may found themselves in SA in accordance with international law and humane norms.”

However, Police Minister Bheki Cele condemned Zanu-PF’s statement and urged the media not to place emphasis on the death of one person, when five people were killed before Nyathi, which proved an issue of criminality.