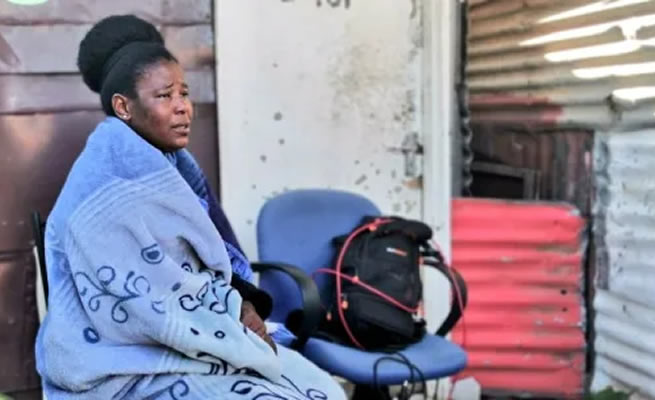 The wife of Mbodazwe Elvis Nyathi, a 43-year-old Zimbabwean national killed by a mob in South Africa, has fled her home fearing for her life amid claims that the Diepsloot local residents are planning to also kill her.

Nomsa Tshuma fled from her home in Diepsloot, a slum area located north of South Africa’s commercial capital, Johannesburg, following the brutal murder of her husband on Wednesday night.

Elvis Nyathi, a 43-year-old father of four, was killed allegedly by a mob demanding to see his passport. He left his home country six years ago and had been living and working in South Africa as a gardener.

Nyathi ran away from his shack, trying to escape from a mob that was moving door-to-door, demanding to see residents’ passports. The mob, however, caught up with him and beat him up with a club, dragged him to a nearby street and set him alight.

Tshuma, who detailed her experience during an interview on SABC said they were watching TV when they heard people shouting for passports and other identity documents.

The distraught widow said: “We were in a friend’s shack watching Uzalo on TV when we heard people knocking next door shouting ‘ID! Passport!’.

“We decided to run away because he (her husband) did not have an ID or a passport and I’m the only one who has a passport. I decided to go with him. We ran past some shacks and hid in a passage, just the three of us. We sat there and heard people coming into the yard, waking up our neighbours.”

It was not until later that she got a call from a friend saying Nyathi was burned by the mob that chased after and caught up with him.

The family and friends of Nyathi say they no longer feel safe. This man, who wants to remain anonymous, has known the deceased for over 30 years. He met Elvis Nyathi in primary school and they became friends until he took his last breath. He’s devastated.

“I’m very frightened as I speak to you. I no longer trust anyone. I no longer feel safe being here. My life is not going to be the same again because these memories are going to haunt me forever. What they did will terrorise the community. They should let the police do their job.”

Speaking to eNCA, ZAPU spokesperson Msongelwa Ndlovu said they will not reveal where Tshuma was going for safety reasons.

He said: “The family is distraught, naturally, and they are beyond themselves. The manner in which her husband died is the most gruesome and we feel it as well. We are not in a position to disclose where she is going for obvious reasons.”

Elvis’s younger brother, Miziayifani Nyathi says the family is not coping well with the tragedy.

“Eish, the family is just disturbed with this whole thing. For such a thing to happen, yet, the guy didn’t do anything. So, it’s really traumatic,” he says.

According to Miziayifani, Elvis’ sin was being outside as the group was searching for everyone in the shacks.

“They accused him of being outside while everyone was inside because he tried to hide behind this (place) since he’d heard these people talking about ID, passport and all that. So, that’s how they caught him.”