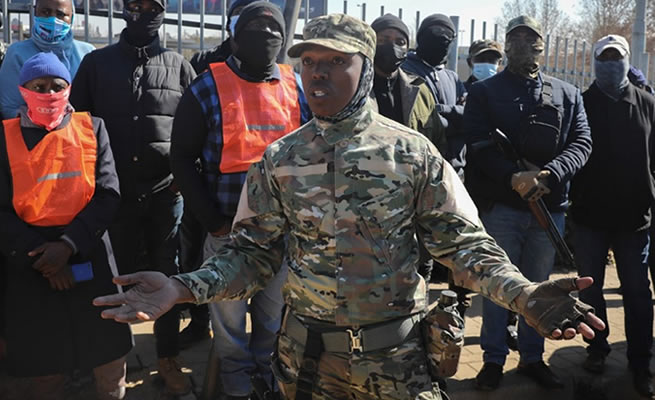 The leader of the vigilante group Operation Dudula, Nhlanhla ‘Lux’ Dlamini, has been granted bail of R1 500 by the Roodepoort Magistrate’s Court.

The state has referred to the Operation Dudula leader as Ntlantla ‘Lux’ Mohlauhi. The charge sheet listed his name as different to Nhlanhla Dlamini, which is how he is publicly known.

Nhlanhla Lux, who heads a movement which seeks to drive out all foreigners who came to look for a job in South Africa, appeared before the court on Monday morning following his arrest last week on charges of malicious damage to property, theft and burglary.

Addressing the court, the state prosecutor said Mohlauli is facing charges of housebreaking with intent to steal and malicious damage to property.

The state asked the court to order that he doesn’t make any contact with the complainant, Victor Ramerafe, and that he hand over his passport to the investigating officer.

The case has been postponed to May 27 for further investigation.

The court ordered Mohlauli to make no contact with the complainant and to reside at his residential address in Pimville, Soweto.

National Prosecuting Authority spokesperson, Phindi Mjonondwana, said the state did not oppose his release on bail as they had no grounds to do so.

She dismissed assertions from some quarters that the charges are politically motivated.

“Prosecutorial decisions are not politically motivated. We had a docket before us and decided to prosecute,” she said.

The Dudula leader was arrested on Thursday after Ramerafe, escorted by EFF members, opened a case at the Dobsonville police station. This followed a raid on his home by the movement’s supporters, who had accused him of drug dealing.

As part of his bail conditions, Dlamini is not allowed to make contact with the complainant. He has also been ordered to to hand over his passport.

The court acceded to these requests.

The court was initially going to order he be confined to Gauteng while on bail, but Dlamini’s legal representative objected to this on the grounds that Police Minister Bheki Cele has apparently invited him to travel the country “educating” others.

Nhlanhla Lux Dlamini became a household name last year, when he was lauded for leading the defence of Maponya Mall during the violent looting that erupted in the wake of former president Jacob Zuma’s incarceration.

In recent weeks, though, he and his movement have been at the forefront of a string of vigilante-style operations.

The raid on Ramerafe’s home last weekend also saw the Economic Freedom Fighters – of which he is a member – enter the fray, and the party accompanied him to the police station last week to open a case.

The case was postponed to 27 May.

Earlier, scores of Dudula Movement supporters, standing about 400m away from the court building, demonstrated outside court over what they said was his unfair arrest. The vigilante group members chanted struggle songs ahead of the bail hearing. There was a high police presence, with several streets around the court closed.

This website uses cookies to improve your experience while you navigate through the website. Out of these, the cookies that are categorized as necessary are stored on your browser as they are essential for the working of basic functionalities of the website. We also use third-party cookies that help us analyze and understand how you use this website. These cookies will be stored in your browser only with your consent. You also have the option to opt-out of these cookies. But opting out of some of these cookies may affect your browsing experience.
Necessary Always Enabled
Necessary cookies are absolutely essential for the website to function properly. These cookies ensure basic functionalities and security features of the website, anonymously.
Functional
Functional cookies help to perform certain functionalities like sharing the content of the website on social media platforms, collect feedbacks, and other third-party features.
Performance
Performance cookies are used to understand and analyze the key performance indexes of the website which helps in delivering a better user experience for the visitors.
Analytics
Analytical cookies are used to understand how visitors interact with the website. These cookies help provide information on metrics the number of visitors, bounce rate, traffic source, etc.
Advertisement
Advertisement cookies are used to provide visitors with relevant ads and marketing campaigns. These cookies track visitors across websites and collect information to provide customized ads.
Others
Other uncategorized cookies are those that are being analyzed and have not been classified into a category as yet.
SAVE & ACCEPT
Posting....