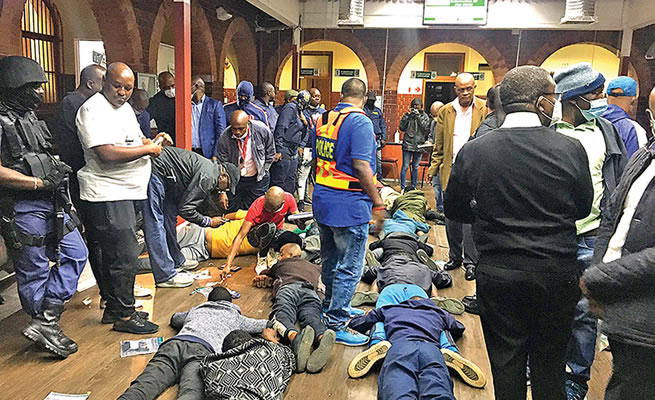 Hot off the runway, these Pakistani foreigners who intended to live and work in South Africa illegally got themselves into some trouble when they tried to enter South Africa without any documents.

The debacle went down at OR Tambo’s International wing in Johannesburg.

The foreign nationals were caught in a fire hydrant tunnel system last week by SAPS.

In the video above, a few men are seen lying flat on the floor while a police officer requests that the people inside the tunnel crawl out.

After much struggle, the men were eventually cuffed and are now facing charges.

More information will be shared on this developing issue when available.

Speaking during a briefing at the airport on Saturday, Minister of Home Affairs, Aaron Motsoaledi, said four of the men are Bangladeshi nationals and four are Pakistani.

The men arrived in South Africa via an international flight and were then meant to proceed to the transit lounge for their flights to other neighbouring countries.

Motsoaledi said since the men were using the airport as a transit point, no visas were required for them to enter South Africa.

He said as the men were heading to the transit lounge, a member of the SAPS, who works at the airport, followed the men. He said the officer noticed that the men suddenly took a detour.

“The police officer followed them and discovered that they actually don’t go to the transit [lounge]. They go through the opening of fire hydrant, they get in there, there are passages where the pipes are,” he said.

He said it is believed that the men were trying to get to an exit point in order to enter the country illegally.

He said the men were caught and arrested.