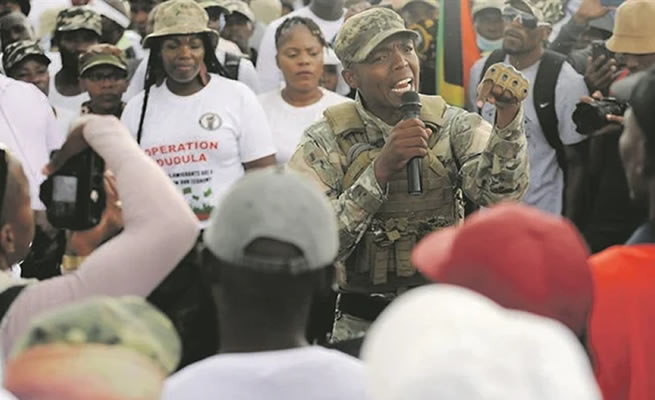 While the organisation only had a permit for a maximum of 300 people, more than 500 supporters clad in branded T-shirts, carrying banners and placards marched through the streets singing struggle songs.

The vigilante group, which is led by a 36-year-old pilot, Nhanhla Lux Dlamini, began in Gauteng last year and has been labelled by some as “xenophobic and dangerous”, was founded in Soweto a few months after the July riots that erupted when former president Jacob Zuma was sentenced to jail for contempt of court.

They targeted suspected drug traffickers and businesses that allegedly hired illegal foreigners in order to pay them lower wages than legally required.

The picket started in Hanover Street and ended at the Cape Town Central police station where they handed over a memorandum with grievances to a representative of the Department of Home Affairs.

Operation Dudula’s leader Nhlanhla Lux was not in attendance as he was said to be in Limpopo. He said they are about to declare war to illegal foreigners living and working in South Africa.

"we don't have a problem with LEGAL/DOCUMENTED foreigners" but it seems like they hav a problem with us calling their ILLEGAL counterparts out🤷🏿‍♂️ pic.twitter.com/fcHFIyYTfa

We already starting to train our mothers, sisters and daughters how to shoot because the war against crime has unfortunately become our reality! pic.twitter.com/Wz0zhTRofK

In their memorandum, the group demanded that the department beef up security at the country’s border posts.

“As a result of a dysfunctional border control system, our country, South Africa, is continuously receiving a large and an uncontrollable influx of illegal foreigners,” the memorandum read.

The movement also wants officials to verify the status of every foreign national in Cape Town, so as to establish if they are legally documented foreigners.

The Democratic Alliance (DA) in the Western Cape, meanwhile, has called on the province’s residents to reject the launch of Operation Dudula’s branch in the province.

“While everyone is indeed entitled to the right of peaceful assembly, the DA said the anti-immigrant organisation formed part of “the concerning trend of xenophobia and Afrophobia that is spreading across South Africa”.

“We call on all residents of the Western Cape to stand against the hatred, intolerance and vigilantism that xenophobic organisations and politicians use for cheap politicking and short-term gain, “said Ricardo Mackenzie, DA Western Cape acting spokesperson on community safety, said in a statement.