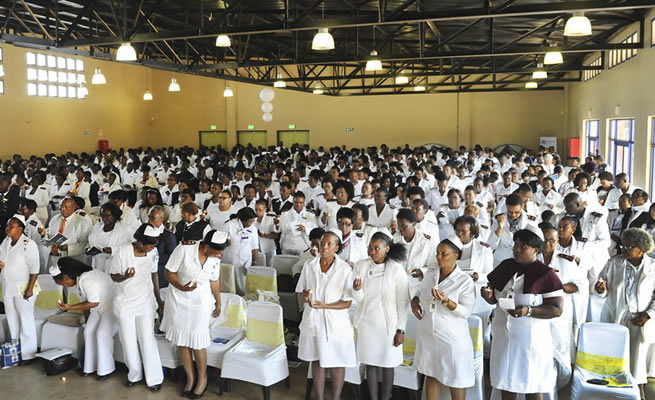 South Africa, like the rest of the world, is currently facing a nursing shortage, says private hospital group, Life Healthcare.

Health minister Joe Phaahla this week warned that South Africa faces a critical shortage of healthcare professionals, pointing to a doctor-patient ratio of 1 doctor per 3,198 people. Phaahla described it as a ‘shocking state of affairs’.

Phaahla acknowledged the need for more healthcare workers in his budget speech and said that at least R7.5 billion had been set aside for the hiring and training of community healthcare workers and medical interns over the next two financial years.

He said 2,429 medical interns and community service personnel – among them doctors, nurses, and pharmacists – were employed during the current financial year, and progress is being made regarding the stability in the employment of more than 47,000 community health workers.

Data published by the South African Nursing Council in 2021 shows that the country has a nursing staff contingent of around 280,000 nurses – equal to one nurse per 213 people. At the end December 2020, there were over 21,000 nurses in training.

Life Healthcare said that in 2022, however, the country needs as many 26,000 additional nurses to meet growing demand.

“Nurses have been on the frontline of the efforts to combat Covid-19 for over two years. They are understandably exhausted and require our support as they continue to deliver quality care to our patients,” the group said.

“Our nurses are very tired. The waves that they experienced since 2019 have really taken a toll on them. But despite that, they still show up, they come to work, they take care of our patients. So just with them doing that, there is hope.”

Life Healthcare Group said it has embarked on an extensive training programme, to meet demand, and aims to increase the number of nurses it is training to 3,000 per annum.

“It is incumbent on government and healthcare stakeholders to address the shortage faced in South Africa. This means expediting the new education requirements and processes that allow the private sector to contribute meaningfully to the nursing profession,” the group said.

“Although the public and private sector offer nursing education programmes, these need to be accelerated to meet demand. Currently we are limited with the number of students we can register in our programmes due to the introduction of the new qualifications,” it said.

What nurses get paid in South Africa

Salary tracking websites, PayScale, Indeed and Talent.com place the average salary for a nurse in South Africa within a broad range of R250,000 to R360,000 per year.

Like many other public service workers, nurses in South Africa have not benefited from massive salary hikes over the last two years, with the third year of negotiated wage agreements (2021) between unions and the government falling away to an incremental rise in pay.

Effective July 2021, public service workers saw only a 1.5% increase in salaries, with a small cash bonus offered to those on lower salary bands.

The highest earners, meanwhile, are nursing managers and executive educators, who can earn as much as R1.08 million a year (R90,300 per month).

The table below outlines some of the main nursing roles and their pay.