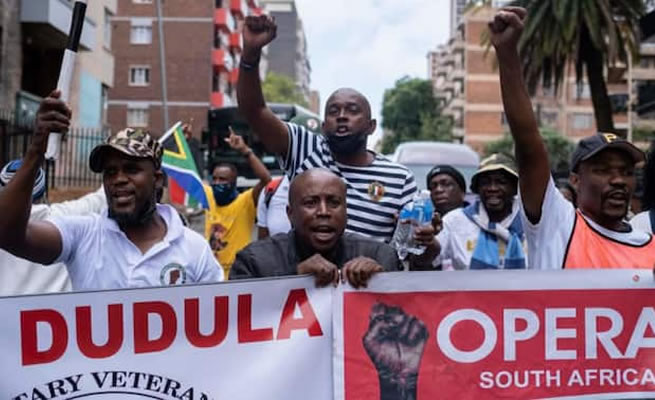 Shopkeepers at the Workshop Shopping Centre flea market breathed a sigh of relief after “Operation Dudula” was cancelled in Durban on Sunday, over security concerns.

While keeping high visibility, the police warned the movement and its organisers to stay far-off the vicinity of the shopping complex.

As the news of the cancellation spread across social media, shop owners made their way back to proceed with business as usual.

Zimbabwean immigrant, Blessed Chitepo, who came to seek employment in South Africa some twenty years ago, has been trading in Durban for two decades, said the people have learnt to live with the unprovoked threat of violence from locals.

“Living in South Africa is a huge blessing for me and my family as we were virtually starving back home in Zimbabwe. But at the same time it has been a curse. I was here when the first xenophobic attacks broke out, and have been here when the others erupted.

“We have learnt to live with the threat… Every time it comes with different people or groups which means we have to contend with something that we are unsure who it comes with, and every time we have to reason with the people around us to find out the real issues,” said Chitepo.

A Malawian man, who spoke on condition of anonymity, said he had lawfully entered the country and asked for asylum, but realised xenophobia was indiscriminate when it comes to violence.

“I have been doing everything according to the law with regard to my living here in South Africa. All that does not matter to xenophobic people who attack us here in this country,” he said.

Operation Dudula’s national chairperson, Dan Radebe, said the cancellation of the operation was a unanimous decision taken between the organisers and the SAPS.

“The launch of Dudula in Durban was meant for the city alone, but upon meeting with the police and having intense discussions, it was clear that the march would have been more than what was expected. So, we reached an amicable agreement that it should be postponed to a later date.

“This decision was measured in response to fear of property damage and the destabilisation of the economy as a result of the march. We do not want that to happen,” said Radebe.

Last Thursday, KwaZulu-Natal police commissioner, Lieutenant-General Nhlanhla Mkhwanazi, said the SAPS had held meetings in response to reports of the movement’s planned march to the Durban CBD on Sunday.

“We have held two meetings with the leaders of the group to hear what exactly they want to do. We made them aware of the law and what it says about entering other people’s premises. Criminality must be fought by the police and the community,” he said.

“Collaboration between law enforcement and other bodies is in place to ensure that violence does not break out in the course of the march,” Mkhwanazi said.